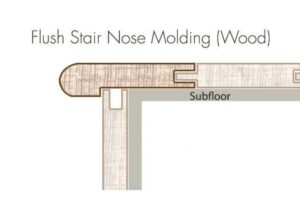 With flush stair nose molding the tongue and groove configuration is used to secure the nose to the floor overlay and the stair underlayment. This offers a smooth surface transition between the stair nose and the floor. In ideal situations the wood color is identical for a appealing look and feel. It is dependent on the manufacturer to provide proper complementary stair nose molding. If customized flush molding cannot be found then the installation might need to use overlap molding described below.

Expansion gap considerations are less important for stair tread placement because the amount of material is small and the expansion slight. Still a mall gap should be allowed where the tread meets the riser. This gap would then be covered by the riser overlay. Overlap stair nose molding can be used in combination with flush molding to accommodate transaction at the top of the stairs, where it would be transitioning from a differing floating floor down to the first step. 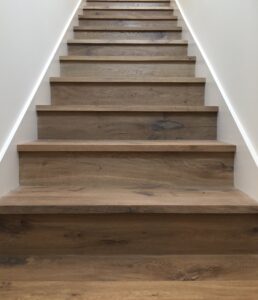 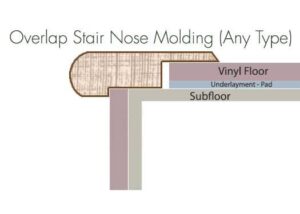 Floating applications require a different kind of Stair Nose: one which can allow for the required expansion gap for floating hardwood or laminates. Overlap Stair Noses have a small protruding piece which overlaps the floating floor and hides the expansion gap, leaving room for free movement of the floating floor. As you can’t float floor boards on individual stairs, the boards need to be attached to the individual stair surface. Overlap Stair Nose pieces are typically only used at the top of the staircase, where it would be transitioning from a floating floor down to the first step.

If the stairs are extra long, make sure to face nail two 8 penny finish nails at approximately every 20 inches. of the molding. It’s important, with Overlap Stair Nose pieces, that you remember to attach the molding to the subfloor and not to the floating floor you’re overlapping. 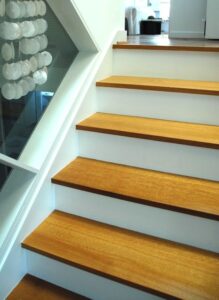 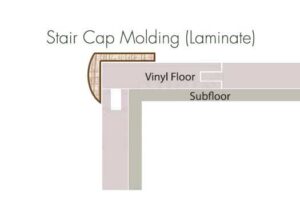 stair cap is a simplified approach to cover the stair nose and extend out over the floor on the tread space. The cap will also extend below the nose to cover any transition between the nose and the riser. The diagram shows a simple stair nose that does not protrude out over the riser. Check with the star nose manufacturer for dimensions to be sure it will work for your application. 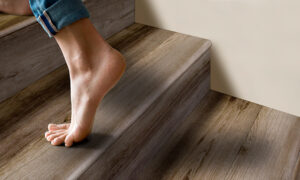 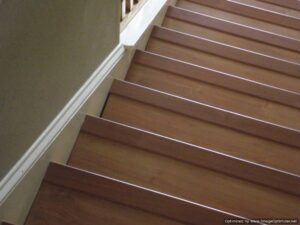